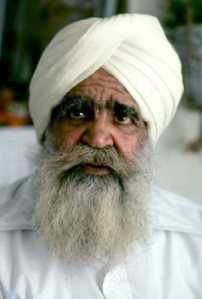 The author of these poems was a remarkable human being, a modern-day Renaissance man. Had he been only a poet, Darśhan Siṅgh’s achievements—five acclaimed volumes of poetry, four Urdu academy awards, and a reputation as the finest Urdu mystic poet of his times—would have been enough to earn him accolades and a place in Indian literary history.  Darshan, however, did not devote himself to one discipline alone. In an age of specialization, his mastery extended beyond the world of poetry to encompass his roles as civil servant, family man, and community servant as well. But it was yet another pursuit—achieving mastery as a mystic—that was closest to his heart. Simultaneous with his other endeavors, totally hidden from the eyes of the world, Darshan devoted himself to realizing God and bringing his individual will into harmony with that of the Divine. To accomplish this, he followed an ancient spiritual path known as Sant Mat, whose cornerstone was meditation guided by a preceptor who had himself realized the Almighty. Darshan’s father, Kirpāl Siṅgh, was passionately devoted to such a spiritual master—Hazūr Bābā Sāwan Siṅgh of Beas in Punjab—and was so advanced in meditation that Sawan Singh ultimately chose him to carry on his spiritual mission. Thus, Darshan was steeped in this spiritual tradition right from his childhood. As he himself wrote, “I grew up in the lap of mysticism.”

I was born into a family with a charged spiritual atmosphere. From the time I opened my eyes, I enjoyed a bliss and peace which many do not experience all their lives. My father, Sant Kirpal Singh Ji, was highly evolved, and four years before my birth he began seeing in his meditations Hazur Baba Sawan Singh Ji, who was to become his Master and mine. Thus, I grew up in a home which was charged with mystic ecstasy. I was three years old when my father met Hazur Baba Sawan Singh Ji and received initiation. I remember how my parents would be sitting in meditation in the morning. I would sit by their side and try to imitate them.

Growing up in this loving ambience and inspired by his father’s example, Darshan began cultivating the art of meditation. All the while, he was guided lovingly by Baba Sawan Singh to develop a consuming passion for attaining mystical union with the Creator.

Despite his routine of strict spiritual discipline, Darshan, unlike an ascetic or a monk, was engaged in the affairs of the world. Following a principle he later called “positive mysticism,” he embraced the responsibilities of daily life, becoming a devoted husband, loving father, and conscientious employee. As he carried out his worldly duties, however, he kept his attention focused on God and continued meditating regularly. The divine revelations he received in meditation served as the lodestar that guided his every activity. The world, like meditation, thus became a sphere in which he could express his love for the Divine. Love, for him, meant serving others, beginning, as he would say, with one’s family and expanding outward to include one’s community, one’s nation, and ultimately the world.